The studies that have been conducted on SSPS so far is overviewed.

J-spacesystems has been studying Space Solar Power System (SSPS) as an alternative future energy resource under a support of METI (The Ministry of Economy, Trade and Industry) and the other related agency for the past several years.

The study has covered from basic laboratory testing level to the practical power plant level. The activities have been supported by working committee. Participants of the committee were selected from people of wide range of backgrounds. They are experts for respective technologies working for universities, industries and research organization. 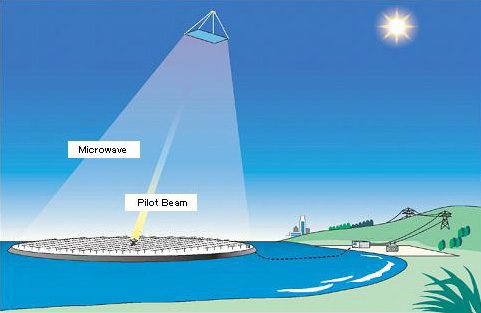 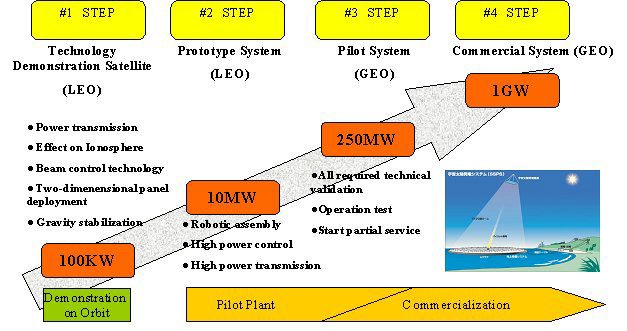 The Working Committee has investigated a simple, technically feasible, and practical configuration SSPS which consists of a large power generation/transmission panel suspended by multi-tether wires from a bus system above the panel. The upper surface of the generation/transmission panel is covered with solar cells, and the lower surface mounts transmitting phased array antenna elements and solar cells. An artist concept of the tethered SSPS is shown in Fig.2. 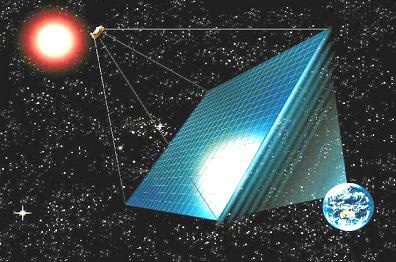 Fig.2 Artist conception of the SSPS

The attitude is automatically stabilized by the gravity gradient force in the tether configuration. So the antenna surface of the panel is always oriented towards the earth without any active attitude control. No moving structure in a large scale makes this system highly robust and stable. The power generation/transmission panel consists of identical modules, which greatly contributes to the low cost production, testing, and realizing high quality. Another innovative feature of the module is the application of wireless LAN system for the signal interface among those panels, which leads to the reliable deployment, integration, and maintenance.
Fig3 shows concept of the “Baseline type” SSPS which is capable of 1.6GW power supply maximum and 1GW average on the ground. It is composed of a power generation/transmission panel of 2.6×2.4 km suspended by multi-tethers deployed from a bus system which is located at 10 km upward. The panel consists of sub-panels of 100 mx100 m with 0.1m thickness. Each sub-panel consists of module panels 1 mx1 m size. There is no wired signal interface between module panels. The control signal and reference signal for each module panel are provided from the bus system by the wireless LAN.
The power generation of the baseline type SSPS varies with the local time as the sun angle changes as shown in Fig.4. The average power amounts to 64% of the maximum power. 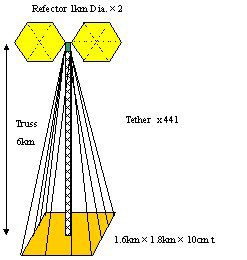 The lifecycle carbon dioxide emission for the operational SSPS has been estimated. The result indicates that the carbon dioxide emission from the operational SSPS per unit of energy generated is almost the same as from nuclear power system and much less than fossil fuel power system, so the SSPS is one of the most effective alternative technology for further CO2 reduction in electric power generation. (Fig.6) 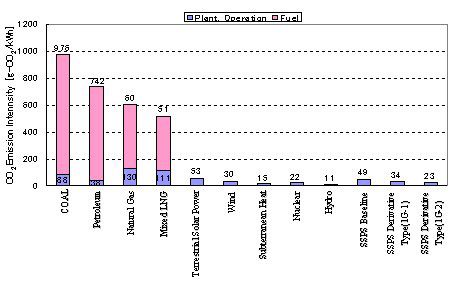 In FY2003, additional study was conducted. The study was focused mainly in the following fields:

Economical aspect, alternative concept, issues to be solved and so on had also been studied.

The feasibility study of SSPS has been carried out since FY2000. The study covers
(1) system definition, (2) system evaluation, (3) WPT laboratory testing. (Fig.1)

The basic SSPS concept (reference model) is a simple, technically feasible, and practical configuration with a large power generation /transmission panel (sandwich panel) suspended by multi-tether wires from a bus system above the panel.

The study has also been done for its dynamic stability, construction method on orbit, operation, economical aspect and development scenario.

The application of wireless power transmission(WPT) on the ground usage has been also studied in FY2004-2005.

As the safety and environmental assessment is a key factor to realize wireless power transmission, it has to be carried out until realization of the WPT system. 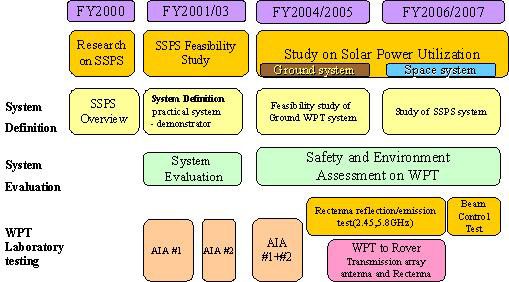 In order to utilize wireless power transmission, we have to consider three main elements:

In addition to these elements, we have to understand and control unwanted emission and reflection of RF energy. We have covered these elements in our testing in some extent.

Beam Control Experiment
The beam control experiment was initiated from 2001. The active array panel with phase shifters, AIA#1, and the hardware retro-directive active integrated array panel, AIA#2, were developed and tested. The combination transmission test was also carried out.

The purpose of the development was to understand the issue derived by the microwave beam steering with integrated panels. And its evaluation was carried out in the anechoic chamber of METLAB, which is the microwave power transmission experiment facility of the Kyoto University. Fig 5 shows experiment in test facility. 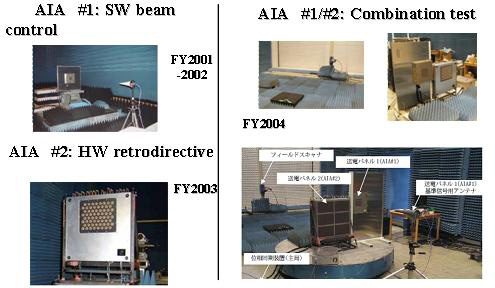 The WPT to remote object is a preferable application of SSPS technology. The rectenna array for rover, light weight phased array panel for transmitter on 5.8GHz had been developed. We also confirmed the low power command communication, 10mw, in 100W level microwave power transmitting condition. (Fig.6) 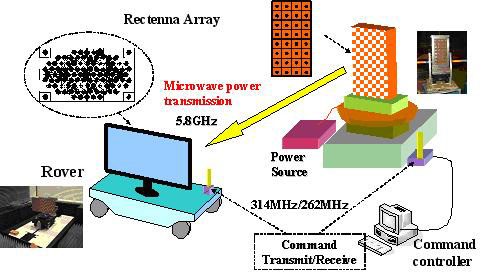 ■Phased Array Panel for the Transmission 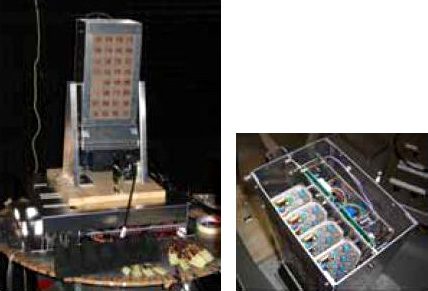 ■Rectenna array panel for the Rover

Fig.8 shows developed rectenna array for the rover. The size is 340 x 600mm. The number of rectenna elements is 97. Weight is 2.5kg. Spacing between elements is 0.774λ.
Fig.9 indicates array test result. Rectenna arrays are composed of 3 blocks (in each block power density is different) and these blocks are connected in series. Efficiency of the rectenna array is about 65%.

Fig.10 indicates the condition of the buffer battery charge. Fig.11 indicates circular test course of the rover. The rover tracks the black tape in this picture. Command from outside can determine if the rover should move or stop.
Climbing line in Fig.10 shows that the coming microwave power is sufficient. It can move the rover and charge the battery. Descending line indicate that the battery is discharged at this period. Starting and stopping rover indicates that the command communication worked between the rover and command equipment located outside of the system.

It is not easy for a huge system like FY2002 reference model (Fig.2) to get financial support at one time. Then the working committee has newly proposed the multi bus type of SSPS (Fig.3) in FY2006. Units of Tethered-SSPS are integrated one by one and finally to the commercial plant of 1 GW level Integrated Tethered-SSPS with multiple buses. Though it is in the process of construction, it works as a single SSPS. 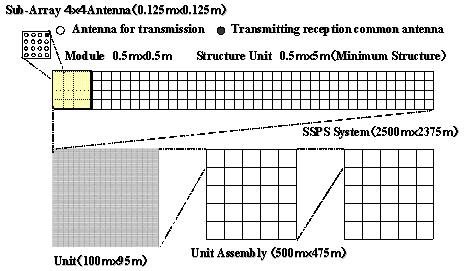 New development plan for Ground microwave WPT has started in 2009.Fig.12 shows new Ground WPT system plan. The new plan is funded by METI. The plan will be conducted with JAXA team.

The system is intended to demonstrate microwave beam control and microwave wireless power transmission with about 50 m distance and kilo watts level transmission power. It has following characteristics:

This image was created by "Research and Development Project on High Efficiencies of Wireless Electric Power Transmission by Space Solar Power System 2020"funded by the ministry of Economic, Trade and Industry of Japan.