The Space Environment Reliability Verification Integrated System (SERVIS) is being developed by the Japan Space Systems (former the Institute for Unmanned Space Experiment Free Flyer (USEF)) under the Ministry of Economy, Trade and Industry (METI). The purpose of the project is to establish a parts database, a parts evaluation guideline and an equipment design guideline to utilize commercial-off-the-shelf parts and technologies (COTS) under the space environment so that they can be utilized for space applications. The SERVIS project was started in 1999 and has been continuing. The first verification satellite (SERVIS-1) was already launched in October, 2003 and its two year on-orbit operation was successfully completed. The second verification satellite (SERVIS-2) was launched in June, 2010 and also completed its mission successfully in June, 2011. Then the SERVIS-3 was started in 2012.

This project has been established in order to strengthen technical and cost competitiveness of the Japanese space industry in the world market. In realizing this, the following considerations are taken into account.

The entire project activity is comprised of four segments. They are;

The flown SERVIS satellite system summary is shown in Table 1. As payload, experimental equipment shown in Table 2 and 3 were onboard. Commercial Parts Test Unit (CPT) is also onboard in order to evaluate COTS parts performance precisely under on-orbit condition as shown in Table 4.

Table 2 Experimental Equipment onboard of SERVIS-1 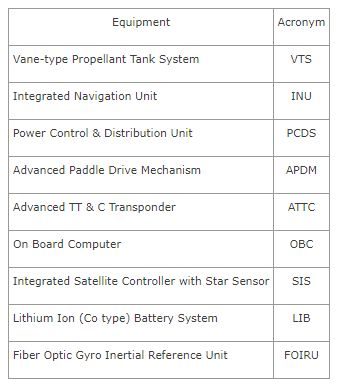 Table 3 Experimental Equipment onboard of SERVIS-2 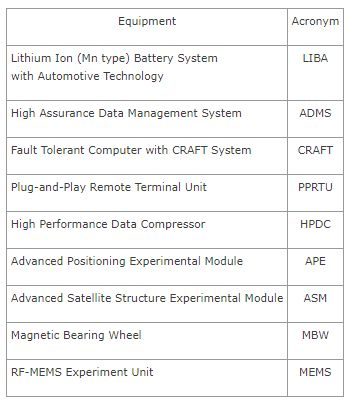 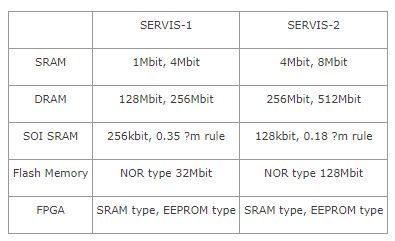 SERVIS-1, which was an 840kg box type satellite with COTS payloads, was launched on October 30, 2003 aboard ROCKOT from Plesetsk Cosmodrome in Russia. SERVIS-1 was operated exactly for two years after the launch. During that period, all experimental payloads had been operated normally and all of them well cleared “extra success level” criteria of the verification test which was established prior to the launch.
Table 5 shows the frequency of single event upsets (SEU) observed for COTS components on orbit, in comparison with predicted frequency as a result of ground radiation tolerance test. As shown in the table, actual frequency of SEUs observed on orbit was less than predicted frequency using ground test results. The table also indicates that better match between ground test and orbit result was observed for proton than for heavy ion, thus proving the concept that proton has the dominant effect for SEU for low earth orbit.
Figure 1 shows examples of the proton and electron data measured by the Energetic Light Particle Spectrometer, which are plotted on a world map. 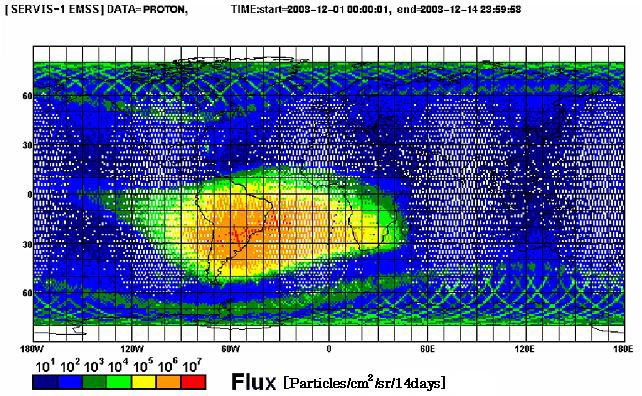 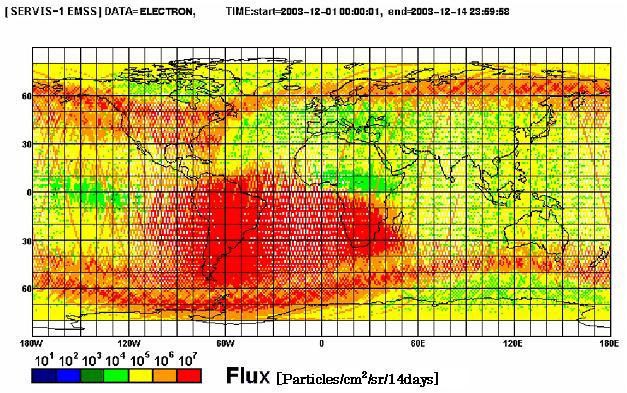 The Commercial Off-the-Shelf parts and technologies database (COTS Database) contains the result of ground evaluation tests especially that of radiation tolerance test.
By this database, one can learn to what extent a certain COTS part can withstand to the space environment, thus to give the criteria in using that particular COTS for space application.
Considering the criticality of COTS information to be used for space application, the database has two-tier structure. Namely, the first tier contains limited information open to the public, while the second tier has more detailed and specific information.
The first tier database contains following information.
1) COTS ID number (assigned by USEF or Japan Space Systems)
2) General specification
3) Summary of radiation test
4) Summary of quality conformance test
Click here?for the first database
Second tier and detailed database is restricted to the relevant personnel or organization only and contains following information.

In case potential users are interested in certain COTS parts by reviewing the first tier database, they can contact Japan Space Systems for more detailed information and would be able to contact with the parts manufacturer for detailed discussion.

This guideline specifies test and evaluation method and criteria for COTS parts in order to apply them for space purposes. It contains following items.
– Characterization of COTS parts v.s. conventional hi-rel parts in general, and issues and necessary considerations of COTS usage for space application
– Description of ground tolerance test methods and criteria for space application
– Estimation method of accurate radiation environment at actual COTS location in the satellite equipment

This guideline indicates various considerations which are required for engineers in order to use COTS parts and technologies for space equipment. It is intended that by following this guideline, space equipment with COTS would have sufficient quality and reliability performances for space use.
The guideline consists of two parts. Part I elaborates design criteria and necessary considerations to be followed. It is intended that it will serve as a design handbook which design engineers always keep on their desks for daily work. Part II explains example of experimental equipment aboard SERVIS satellites from the standpoint how COTS parts and technologies were applied in those equipment. It is intended to promote the understanding of COTS application for space use.