The objective of HISUI onboard ISS is to obtain data necessary to start a full-scale practical application development for hyperspectral remote sensing through manufacturing and in-flight performance verification of a hyperspectral imager with high spectral resolution onboard ISS by FY2021. More specifically, through the deployment of the manufactured instrument on ISS, its calibration and mission planning, data acquisition/analysis, we will verify its usefulness in various applications such as oil resource exploration, evaluate the potential of the manufactured instrument, and acquire knowhow to put hyperspectral imagers into practice.

HISUI project is currently being promoted by two organizations each of which has a contract with METI: Japan Space Systems, and National Institute of Advanced Industrial Science and Technology (AIST). In addition, several scientists from domestic universities and national research institutes are participating in the HISUI project. HISUI instrument was successfully launched on Deceｍber 5, 2019 and installed on Japan Experiment Module Exposed Facility (JEM EF) on ISS. The schedule of HISUI project is shown in Figure 1. 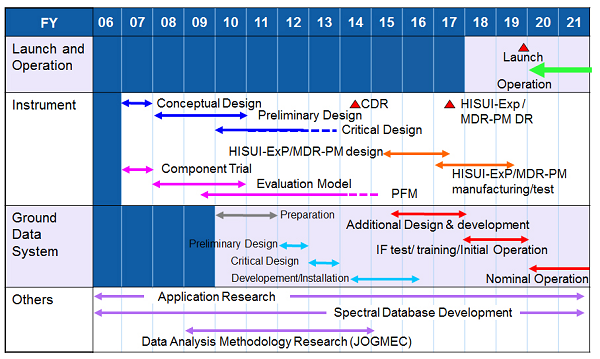 Figure 1. The schedule of HISUI project.

2. HISUI SPECIFICATIONS
The basic specifications of HISUI are summarized in Table 1. The swath of HISUI is narrow due to the optical design constraints and the available two-dimensional detectors. HISUI consists of a reflective telescope and two spectrometers which cover the visible and near infrared region (VNIR) and the shortwave infrared region (SWIR). Each spectrometer consists of a grating and a two-dimensional detector. SWIR spectrometer has a Stirling cooler for the SWIR detector. 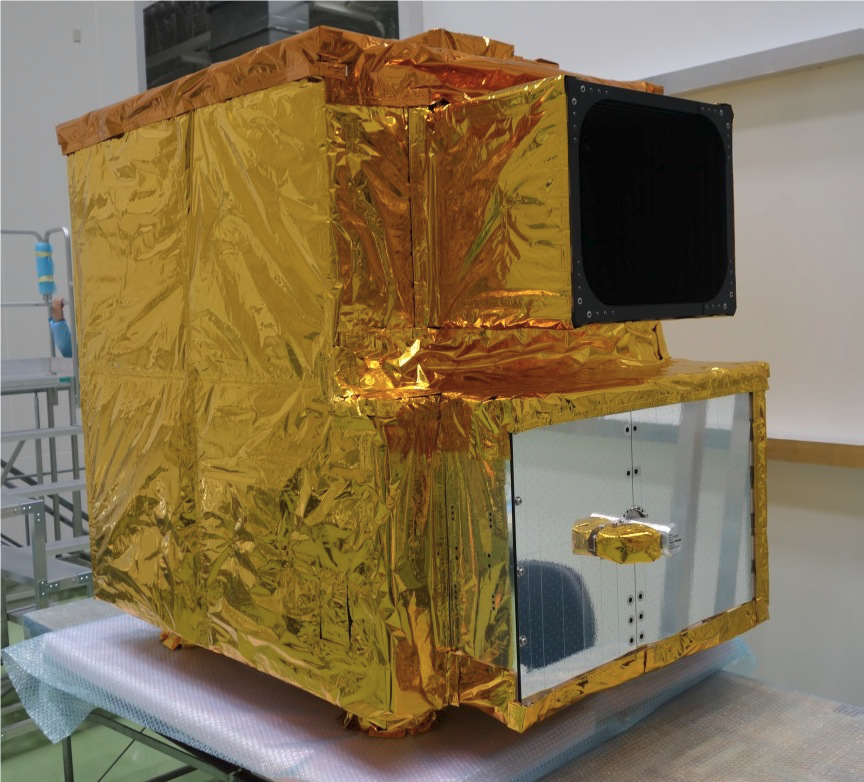 The schematic diagram and the data flow of HISUI on ISS are shown in Figure 4. 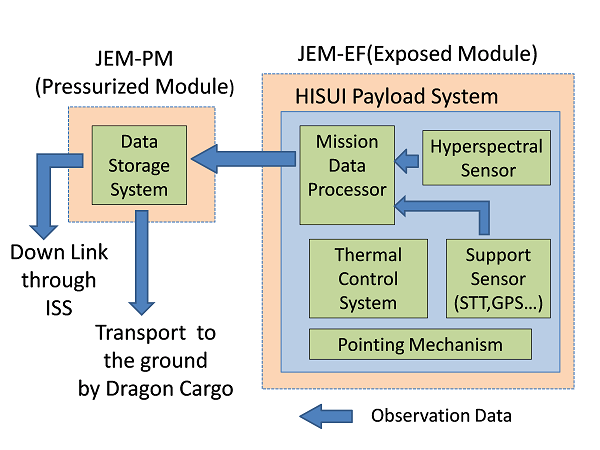 4. HISUI GROUND DATA SYSTEM (GDS) STATUS
4.1. HISUI GDS
The development of original HISUI GDS for a dedicated satellite was finished in FY2017. Additional GDS development related with HISUI’s deployment on ISS was started in FY2015. The development of HISUI GDS for ISS will be completed in the late FY2020. 4.2. Level 1 Processing
HISUI Level 1 data is a standard product and acts as inputs to higher level products (Table 2).
The Level 1 processing flow for HISUI is shown in Figure 5. Level 1 data processing guarantees geometric, radiometric and spectroscopic performances. Radiometric and smile corrections are carried out on orbit. Keystone properties are corrected in the map projection process. Radiometrically corrected Level 1R data are map-projected to orthorectified data, Level 1G. Two slits for VNIR and SWIR spectrometers cause disparity due to the difference in line-of-sight vectors between detectors. To fusion the VNIR and SWIR data, parallax correction is carried out using registration techniques with the aid of the digital elevation models. Since the telescope cannot keep the yaw steering condition on ISS, a software revision to find the corresponding points is underway. Table 2. HISUI product list.

4.3. Level 2 Processing
HISUI Level 2 surface reflectance product contains atmospherically corrected surface reflectance for each of the VNIR and SWIR bands. The Level 2 products will be generated from L1G product as Science products (Table 2). HISUI atmospheric correction algorithm will use “Dark Pixel” method. We evaluate this algorithm using EO-1 Hyperion data and so on. Currently, Thuillier (SUN01thkur) and NewKurucz (SUN01kurucz2005) model in MODTRAN5.2 are adopted as the HISUI irradiance model. Validation plans for HISUI atmospheric correction algorithm are to be discussed. 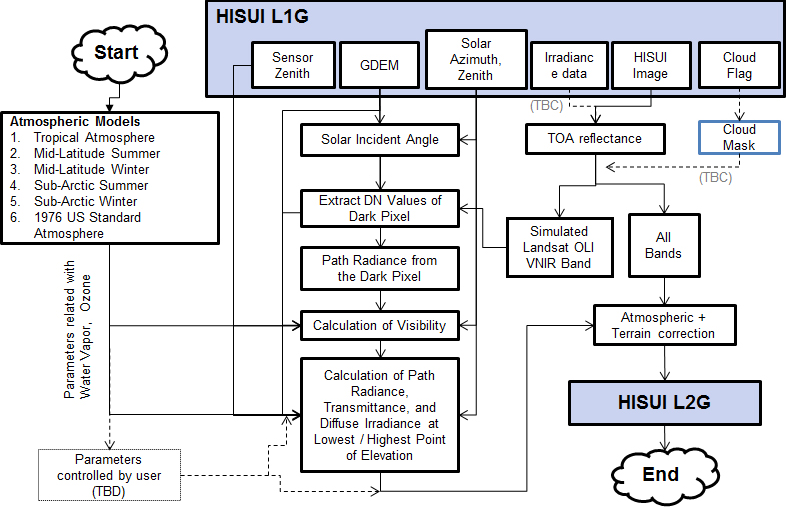 4.4. Radiometric Calibration
The pre-launch calibration of HISUI is conducted using a large integrating sphere traceable to the SI, and after the launch, the onboard calibration will be carried out using the onboard calibration unit including a lamp. The vicarious calibration will be conducted over the dry lake sites located both in northern and southern hemispheres, and we may use automated calibration facilities due to orbital characteristics of the ISS. HISUI will also be cross-calibrated with forthcoming hyperspectral instruments on ISS. The data associated with these calibrations will be archived in the Calibration Data Archive System (CDAS) and the HISUI Calibration Working Group plans to assess HISUI radiometric performance and produces radiometric (geometric) calibration databases over CDAS, which are required in Level 1 processing. 5. HISUI MISSION PLANNING
HISUI will have its own data receiving, storing, and sending devices on EPS and JEM Pressurized Module (PM), Mission Data Processor (MDR) and Mission Data Recorder in Pressurized Module (MDR-PM). HISUI data sent from MDR will be recorded on the removable media in MDR-PM and after recording, the media will be shipped from ISS to the Earth several times in a year. In addition, the limited amount of HISUI data will be transmitted from ISS to the ground station in near-real time. To investigate requirements on these devices, preliminary long-term operation simulations of HISUI for three years were conducted (Figures 7 and 8). Three types of data acquisition requests were considered in the simulation: 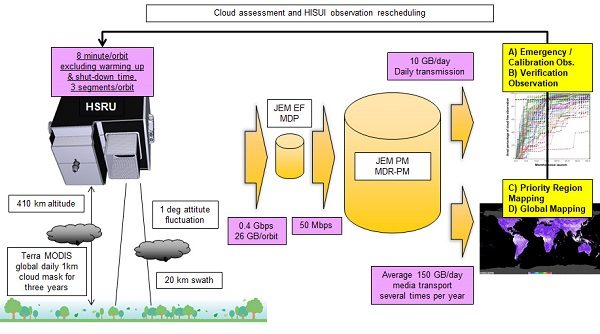 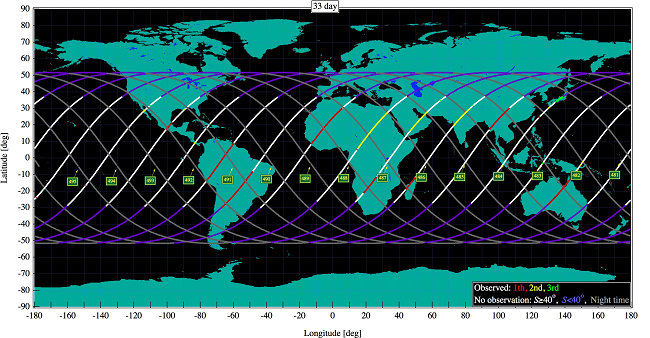 6. HISUI DATA POLICY
HISUI data policy is under consideration and the directions of discussion is as follows. For collaborators and research announcement investigators, HISUI project will give priority observation, priority downlink and distribution for their requested areas for free. And for other science users, HISUI project will distribute the archive data.